Hey gang,
So I've got a pretty serious problem on my 2008 Cyclone 4012. This is also a good reminder to NEVER loan your RV out. I own this trailer and an enclosed car trailer and literally every time I loan one of them out it comes back broken. Like they said back in that D.A.R.E. campaign, "Just say no!"

So here's the deal, one of my front landing gear legs has the bolt that holds it in the bracket sheered off at the bolt head. Of course, it's the driver's side leg, so it is the one behind the generator box. I can see the broken bolt up inside there if I look from the bottom, but there's a giant steel plate that "covers" the bottom and has an "opening" for the leg to come down through. That hole is only maybe an 1-1/2" larger than the leg itself, so there isn't really room to stick a hand up in there and work with tools. I cannot find any other sort of "access panel" to get to this bolt. Am I missing something? Or is there a way to get access to that landing gear leg? The passenger side leg is fully accessible, but the driver's side leg appears to be totally concealed. Help!

Just to help identify things, are we talking about one of the bolts that encloses the landing gear leg in the U shaped support welded to the trailer?
See attached image: 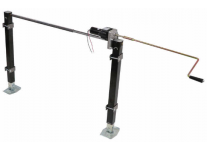 All I could suggest is that you will probably have to start with removing the generator shroud. The bolts I am

Yes, that is correct. Here is a shot of the bolt - 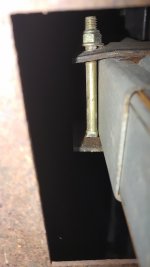 As you can see (sort of) the cap head is sheered off. Here's a shot of the "hole" that leg comes through - 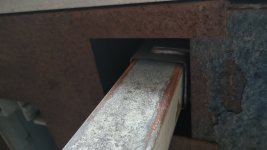 For the life of me I can't see a way to get access to it to replace it. As I said, this is the one "behind" the generator.

Maybe a long nose pliers like this could help you get the old bolt out and a new one started in:

You may be able to use the long locking pliers with a round end wrench and tape to start and tighten the nut on. If using a combination wrench, you may want to sacrifice the open end by hacksawing it off for better connection to the locking pliers. A magnet on a shaft may be a handy tool, too.

You probably want to jack up the frame near the leg to take it slightly off the ground so you can maybe wiggle it some to help things along. Loosening (not removing) the other support nut/bolt may help with this, too.

Good luck, and I can't figure how anyone's misuse of the trailer caused this bolt to shear.

Thanks Bill,
I was able to reach it with a long pair of pliers. But the problem I ran into here was that the end with the square "shoulder" won't pull through the hole at the threaded side, because that hole is round, not square. And I can't get ahold of it to take the locking nut off the threaded end to pull it through the other side. So unless I can find an access to this bolt that allows room to actually do things, I guess this trailer is useless.

Oh, I do have it sitting on a 6 ton jack stand, not the landing gear leg. There was no way I was putting weight on that leg with the bracket basically doing nothing.

I'm at a loss here. I can't see a way to get at it without major construction.

If nobody else comes up with an idea, call Heartland service on Monday morning. Maybe have your photos ready to e-mail them. Maybe you should have an experienced mobile RV repair guy come out who might have some alternate ideas.

On edit: If you can get those long locking pliers locked strongly on the middle of the bolt, maybe you could use a crowbar or thin prying device to pry against the pliers locked on the bolt using the access hole surround as a pry point to get the bolt head free from the hole.
Last edited: Aug 21, 2021

The square shoulder was installed in the square hole. But it sheered off just the cap head and left the square shoulder on the shaft. With the lock nut on the other end, it's proving to be problematic. I really don't want to cut the trailer apart to get at it. If I have to cut a hole, it'll be from the propane tank area. No way I'm cutting the fiberglass.

From what you describe of the shoulder of the square head being firmly stuck in the square hole in the U support and you haven't been able to budge it with limited tool access, I think you may be able to leave the situation as-is. The bolt acts as more of a final retainer with the U bracket doing 3/4 of the work of holding the leg in place. There is also a 2nd bracket on the leg doing the same job. You could maybe snap a couple of locking pliers on the U bracket below the bolt against the leg semi-permanently to back up the bolt which is already tightly in place. Maybe you could fabricate a metal retainer to go across the leg between the two locking pliers to back up the bolt function.

Again, sorry this has happened to you, maybe it isn't as bad as it first seemed, and hope I have been of some help.

Thanks Bill,
The square shoulder end was not holding in the square hole side of the bracket. It was just dangling there, by the end with the nut on it. You could wiggle the whole leg, so it wasn't tight by any means. That's why I set it on the 6 ton jack stand, because I was concerned about the leg folding up on me if the trailer shifted in any way. With the shaft of the bolt having a noticeable bend at the threads, the nut wouldn't budge, and the square shoulder wouldn't pull through the round hole.

I did manage to get up in there with a Dremel tool with a remote whip attachment and a cut off disk on it, "clamp" the bolt in a pair of vice grips and cut the bolt in half. So it is out now, I just need to source a new bolt and find a way to put it up in there.

I do see now how the "access" for this area works. The big steel plate on the bottom of the frame rails has bolts all around the perimeter, so it appears that the method is to unbolt that entire plate and lower the whole thing down, generator and all. That would take quite the large jack or forklift or something, all things I don't have so I'll stick with attempting to do this through the tiny gap around the leg. Hopefully I can pull this off!
D

Keep us informed on your progress.

I got a new bolt up in there, but getting a nut started on it has proved to be problematic. I ended up dropping the nut and it fell down inside this "frame rail" part at the front. With no way to access that area, my nut is gone forever.
I went back to the cut bolt and managed to pull that nut off the bent threaded portion. Yay, maybe I'll use this one then. Nope, dropped it too, same area inside that little "frame rail" sections, no way to retrieve it either.

I think if I can get like 50 nuts, after a while of dropping them all down in there it'll fill up and they will quit going down in there!

Can you come up with a magnet on a stick, duct tape wrapped around the nut at the end of a stick, or a releasing adhesive like shoe goop?
No way you can use the long vice grips? Cut an access hole in the generator shroud???

I wouldn't worry too much about the dropped nuts unless they are directly in a moving part mechanism. again, you may be able to fish these out with a magnet on a stick or stiff flexible wire.

Keep pluggin' away at it, and I hope that better luck comes your way soon!!! I know that jobs like this can be super frustrating, and make you want to do bad stuff to the design engineers (like make THEM fix it).

Well, I bought 4 extra nuts, so of course the first one went right on with no problems!
The answer was to clamp the nut in a pair of vice grips, hold that against the end of the bolt and luckily my fingers were small enough to be able to spin the head of the bolt at the other end and it threaded on! So yeah, I think my trailer is back in action! Fun times, I hope I never have to do that again!

Now on to the laundry list of other issues we ran into last time out!

Adjusting the Height of Rear and Side landing gear

2021 Elkridge - Landing gear collapsing while sitting and lowering while driving.