Can you winch a motorcycle into a Toy Hauler?

I believe they should be strong enough to do that, especially if you connect to 2 of them.

Maxx, hopefully Duane (porthole) will see your post and respond. He installed a wench in his Cyclone. If I remember correctly, he installed the wench in one of the front corners and then ran the cable through a pulley mounted in the center of the garage and then the cable goes out the door. If Duane doesn't respond in a day or two, send him (porthole) a PM, he is a great guy and is always willing to help.

I have a small remote controlled winch bolted to the floor of the garage.

I have had to use it with the golf cart when I fried the controller and it worked.

I would also use it if I had to load the bike in the rain rather then take a chance riding up a wet ramp.

If you use a winch, prepare to have something on the floor at the beavertail to keep the cable from digging in. I use a piece of Starboard marine plastic, very similar to cutting board material , HDPE

I use a Condor wheel chock, best you can buy in my opinion.
I recently added a pulley to the Condor to allow pulling from a higher angle. I would use two tie down sewn webbings around either my upper or lower driving lights.

Something else I have been doing for years now to greatly reduce the stress of unloading is not using the brakes!

I put the bike in first gear and only use the clutch when backing out, ENGINE OFF. Feathering the clutch allows for a very controlled backing and keeps the rear tire loaded. It may help with the smoothness that I have a hydraulic clutch release as well.

At the 2016 Luray rally several of us where sitting at the trailer when our new neighbors pulled in (SOB). Apparently they found out first hand that you shouldn't trust harbor freight straps with precious cargo. One of bike's strap broke (not a Harley). That bike fell over into the Road King and broke another strap. While the first bike was on it's side, apparently the bottom port of the master cylinder was exposed, draining some fluid from the cylinder.

When the owner backed the bike out of the trailer he found out real quick he had no brakes. He ended up going down the ramp - backwards - as fast as gravity would pull him. It was about 10-15' from the trailer before he finally fell over with the bike on top of him.

Nothing broken, cuts, scrapes and bruises though. They had an adjuster out the next day and had almost $4,000 in damages between the two bikes.

It was quite the sight.

Did your DW approve of that addition????

Lou_and_Bette said:
Maxx, hopefully Duane (porthole) will see your post and respond. He installed a wench in his Cyclone. If I remember correctly, he installed the wench in one of the front corners and then ran the cable through a pulley mounted in the center of the garage and then the cable goes out the door. If Duane doesn't respond in a day or two, send him (porthole) a PM, he is a great guy and is always willing to help.
Click to expand...

Hey there Lou, I was writing and looking up links !

I use the winch below. I like it cause it is light and 110v as opposed to 12v. I hook it into the forward center d ring eye. I use it to load my front wheel drive GEM car. About 1,000lbs. 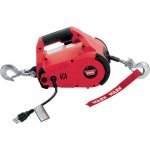 Thank you guys so much for the responses. That's some great information. My bike is a Harley Ultra...so 800lbs+ and loading it up and down a ramp is not something to mess around with. I don't want to damage the bike, the trailer or me! (especially the bike and trailer...I'LL HEAL! ) I will definitely setup my trailer based on your suggestions. Again, Thanks.
D

I’m trying to figure out how your pulley works on the condor. I can’t figure out how your cable runs from the floor mounted winch to the motorcycle. Any other pictures? I got lucky last time and the exhaust angering into the ground stopped my roll down the ramp. That and me pinned in between the bike and patio gate.

The winch was in the forward left corner, drum parallel to the frame rails.

Cable went straight out towards center of rig, pulley for directional change towards the rear than up to that pulley on the condor.
You must log in or register to reply here.

S
Hello! I'm new and hoping to learn from this group!