Gang:
I just read this morning about Elon Musk's sending the first tweet on his Starlink Multiple satellite (12,000), low orbit, light weight (100lbs), satellite internet system. Space-X has been shooting up missiles every couple of months with 80 of these satellites aboard. Starlink US service has been previously projected to start in early 2020. From the way it sounds, being developed with the idea of universal worldwide internet access, that no dishes would be needed, and it would work a lot like satellite radio.

Check out the Starlink website: https://www.starlink.com/
I especially loved the 3rd picture of the 80 satellites stacked up like plates in the nose cone of the missile.

Low earth orbit with a claim of low-latency and high bandwidth. Hope to hear more from them soon.

Dish Network offered satellite internet for a time. It was only available to a fixed location, not suitable for an RV'er. I'm not certain if it's still available, as I heard that there were some problems with it.

They offer it but it's Hughesnet.

jayc said:
Dish Network offered satellite internet for a time. It was only available to a fixed location, not suitable for an RV'er. I'm not certain if it's still available, as I heard that there were some problems with it.
Click to expand...

The only one I knew of is Hughesnet by itself or bundled with Direct TV.

It turns out they bundle with Dish as well.

mlpeloquin said:
The only one I knew of is Hughesnet by itself or bundled with Direct TV.

It turns out they bundle with Dish as well.

My son in-law has Hughes Net at home and it’s horrible, very slow but their only option!

We had Hughes Net and the signal fluctuated so bad you could not stream anything, half time it didn't work so we got rid of it. We had better luck with

I suggest that everyone comparing this to Dish Network, Direct TV or Hughes take a look at the links on the original post. This system is something entirely new:

1. It will eventually be 12,000 satellites, not 5 or so like Dish, Direct, or Hughes. About 300 of these are already in orbit.
2. The satellites will NOT be fixed over 1 point (Geostationary) like Dish, Direct or Hughes. It will be an expanded version of something like the Sirius/XM Satellite radio systems using multiple satellites that orbit the earth continually. You receive the signal from the nearest Sirius Satellite, and they stop transmitting to earth to recharge the satellite batteries as those satellites orbit over non-North America parts of the world. Remember that 6/7 of the earth's surface IS NOT LAND.
3. These are 100 lb satellites as opposed to the 10,000 lb average TV/Internet communications satellite.
4. These satellites will have an orbit elevation of about 1/2 that of the geosynchronous communications satellites now in use.

See image to see how the orbital paths are projected: 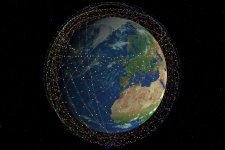 Each of these satellites will aim down at the earth and reach an about 660 mile radius.

I agree with you. These are low-earth orbit (LEO), a few hundred miles up, not 22,000 miles up in geo-sychronous orbit. The LEO is what enables the lower latency; latency being a killer on most internet usage other than streaming video. And if they have enough ground stations with the right data architecture, they'll be able to move tons of data through the satellites.

Here is a recent article on the Starlink system in the ZDNet technology magazine. It seems that the current estimate of the rollout date for the US is now mid 2020. It has an estimated monthly cost of about $80. No mention on transceiver/antenna costs.