Wanted to inform others of the issues I’m having with the drawers and cabinet in our 2017 rear kitchen 3100CK. We bought the unit new this past June and have less than 3 thousand miles on it.

The drawer below the fridge was the first to fail. The staples that hold the luan bottom to back of the drawer pulled through the luan and the staples that hold the center support (piece of particle board) failed causing the center support board to fall and jam the drawer. I was able to remove the drawer and, using gorilla glue and L-brackets, repair and re-inforce it. A month later the drawer below the stove failed the same way and again I was able to remove and repair it.

Both of these drawers are much wider and deeper than the other 3 drawers under the countertop. Preferring to keep heavier item lower in the unit we were using the larger drawers below the fridge and stove for small pots and pans, cookie sheets, plastic cutting boards and such. But obviously these larger drawers weren’t built properly.

After removing the microwave I was able to straighten the bent staples and, using a hack saw blade, cut them off. This provided a flush fit of the cabinet face to the support board. I then ran 4 screws through the cabinet face and into the support board. After replacing the microwave the screw heads and just barely visible (photo #2). The trim that runs across the top of this cabinet face had also fallen off and needed to be glued and tacked back in place. I did find another piece loose trim along the left side of the microwave which was being held in place with a single brad (photo #3)

Have to say I’m very disappointed with the quality of workmanship is this area of the camper. So far the rest of the unit seems solid. 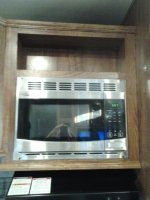 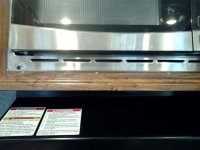 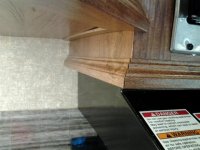 Thanks for sharing all that. Ditto on disappointment with workmanship. I have found that the drawers can hold very little weight. They're useless. I ended up storing pots and pans under the couch and bed. What were they thinking?
Also, the first time I had to gain access to the slide out motor I had to pull stapled trim off. So, I have also seen missed and bent staples that do nothing. I replaced the trim with screws and sure enough I've had to get back in there again (due to poor workmanship wiring the slide out motor switch). Again, what were they thinking when they provide a flexible drill attachment to manually retract slide but then make the motor inaccessible without pulling stapled trim off?
~ Mark '15 22FBS

Rear kitchens are known for rough riding, every bump is magnified from being to far behind the suspension. This is the one reason I won't own one, the other is for weight distribution, kitchens are very heavy by the time they are equipped and stocked.
C

True that, and I knew it going in. But Heartland didnt do their part.

Stripped out screws, bent over staples and / or staples completely missing the supporting framework isn't the fault of the owner who chooses a rear kitchen model.

This isn't my first RV and but its some of the shoddiest workmanship I've encountered. Perhaps the worker who built the rear cabinet had a bad day or was pushed by management to complete the work in too short a time. In any case, had the cabinet and drawers been assembled correctly the problem may never have occurred.

I'm not saying all Heartland units are of poor construction, I'm just pointing out what I found in my unit.
R

... and my kitchen is over the axles but with many of the same signs of poor workmanship and problems.

Want to add that the other storage areas of the kitchen: Upper cabinets, pantry, trim and such, seem to be solid.
You must log in or register to reply here.