Just finished replacing the leaking front doorside landing jack on our Lippert 4 Point Levelup. When our Landmark was built in 2H 2010, 4 Point was all there was - no 6 Point. Instead of the rearmost jacks, the 4 Point includes stabilizers at the back.

Replacing the jack is pretty straightforward, and I recommend watching Jim Tanner's (Oregon_Camper) video to understand the basic approach.

On ours, the 3 of the 6 mounting bolts were much harder to break loose than those on Jim's video.

As a tip, when disconnecting the hydraulic fittings, be prepared with a couple of quart-sized baggies. I was able to catch some of the fluid as each hose fitting came free, and then put the fitting into the baggie and closed the slider around it (yes, the baggie with sliders). When done, closing the slider all the way made for an easier cleanup. I also laid down some absorbent paper shop rags where the hydraulic fluid was likely to spill.

I ran into a problem removing the valve from the old jack (it has to be moved to the new jack). Not all jacks have a valve, as valves are usually shared between a pair of jacks. On our 2011 model, each jack has its own valve and can be operated independently. Apparently, Lippert stopped that practice quite some time ago as their Customer Service tech wasn't aware they'd ever done that.

The space between the body of the jack and the valve assembly was too narrow to use a standard open end wrench. I got a thin wrench set from Amazon that turned out to be unnecessary. It turns out what I thought was a twist knob for manual operation, was actually a retainer, as shown in the picture. Once the retainer is spun off, the body of the control sleeve slides off. Then a 7/8" open end (thick or thin) will spin the nut off along with the rest of the valve assembly.

There's a setscrew (not shown) on the outside of the valve assembly, that's used to manually open and close the valve. I took that out first, hoping that would help with the removal, but that was probably unnecessary.

All in all, a pain, but not terribly difficult. On ours, the most time consuming part was breaking the bolts loose. The mistake with how to remove the valve cost me time re-mounting the old jack, and then taking it all apart again. Apart from those 2 issues, the whole job would have taken about an hour. 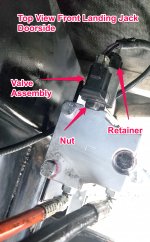 Glad it provided you some helpful information.


danemayer said:
On ours, the 3 of the 6 mounting bolts were much harder to break loose than those on Jim's video.
Click to expand...

LOL...If you listen close you'll hear me say we already loosened them, as Matt removed them by hand. We used a breaker bar to get them started.

Oregon_Camper said:
We used a breaker bar to get them started.
Click to expand...

My breaker bar worked on the 3 on one side. Didn't do any good on the other 3. Chemicals didn't help either. Took over an hour of brute force.

danemayer said:
My breaker bar worked on the 3 on one side. Didn't do any good on the other 3. Chemicals didn't help either. Took over an hour of brute force.
Click to expand...

Probably the elixir of stuff they use to keep the highways clear in Colorado in the winter, cements metal parts together very well!

TravelTiger said:
Probably the elixir of stuff they use to keep the highways clear in Colorado in the winter, cements metal parts together very well!

Maybe. The part I found odd was that the 3 bolts on the front were not frozen.

For tough things, I don't Try and force them anymore. I use Mouse Milk first and let it sit. It really penetrates and loosens the really stuck bolts. The last resort is the breaker bar.
You must log in or register to reply here.