I'm replacing all 7 circuit breakers today but want to ensure they were installed correctly to begin with. I couldn't find any source of information that talked about breaker orientation with respect to converter and battery. I know the copper post would be battery and the silver would be auxiliary (out). But the current setup is not entirely reflected that way. 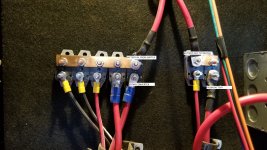 how I "think" the new setup should be (the copper bus bars would be connected across the top of both banks): 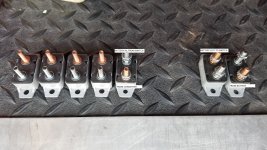 
Which one is correct? If it's the first picture, can anyone clarify why the battery and converter would not be on the battery (copper) side of the breakers?

Sent from my SM-G975U using Tapatalk

I think your underlying question is whether these circuit breakers are polarity sensitive; i.e. does it matter which way power flows through them.

There are a couple of possible answers.

First, the breaker that connects the Power Converter/Fuse Box to the Battery has power flowing in both directions. While on shore power, the Power Converter output has to cross that breaker to get to the battery. When you are not plugged into shore power, the battery power has to flow the other direction through that same breaker to get to the fuse box. So, given that circuit must be bidirectional, the orientation doesn't seem to matter.

Second, look for a manufacturers spec. Eaton/Cooper-Bussman is one of the primary manufacturers offering these breakers. Their catalog and website does not mention polarity or why one terminal is copper colored and the other silver colored. If it were important, I would expect they would mention it.

Third, some types of breakers do have polarity and are marked with a + sign to show where the hot wire gets attached. I don't think these breakers have any such marking.

Fourth, as a matter of convention, the copper color terminal is typically the one sharing the copper bus bar. But that just seems like it's a convention, rather than a necessity.

So I would suggest putting the new ones in the way you found the old ones. But other than possibly causing someone confusion down the road, you could probably put them in any which way.

This is going to be an interesting discussion. That's what I initially thought, except that the Short Stop breakers that came out and the new "aftermarket" breakers are all labeled with "Bat" on copper and "Aux" on the silver side. One of the online stores I came across that carries the Bussman breakers mentioned the same--connect Battery to the BAT and the auxiliary components to AUX.

Power is obviously capable in flowing both ways, but my concern with the converter and the battery is that they may not be "as protected" if neither "sources" of power are connected via the copper stud. This is what I mean:

If the power flows from copper to silver to provide power to auxiliary components, it would seem that if there was a short on the aux side, it would be better suited to have both the converter and battery connected to the copper side.

I decided to dismantle a bad breaker. Here is a picture of the internals of that old 50A breaker that was connected to the batteries that was not allowing power to flow through from the converter to charge those batteries (I figured out how to make the picture bigger): 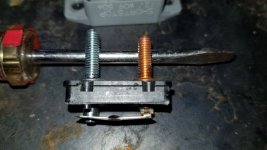 The copper side is connected via contact only and seems pretty burned; the silver side looks to be pressed on. Ohm check showed 1.4 ohms. New breakers are ~0.2 ohms. This breaker was connected directly to the battery bank via the silver stud (right dual-breaker bank, right side)

Now I wonder if it does matter which way they are connected? While they are definitely capable of flowing both ways, it would seem it's more appropriate to have the power connected via the copper?

danemayer said:
The Power Converter and Battery must be separated by a breaker. And it's intended to be a manual reset breaker. If, for example, the Power Converter were to malfunction in a way that could harm the battery, you would want the breaker to interrupt power. Or if the battery shorted internally, you would want the breaker to open before it caused damage to the Power Converter. If both were connected via copper buss bar, everything would function, but not offer any protection against malfunctions.
Click to expand...


Since the converter breaker is now manual and I have no clue what the internals look like, it would seem if it's connected with the copper stud on the copper bus bar, it would simply be acting in the same fashion as the automatic breaker connected directly to the battery?

Maybe someone else has additional thoughts.
6

I asked an engineering forum. I'm curious to see what they say about it.

Sent from my SM-G955U1 using Tapatalk

Wow! And why are you doing all this? Have you been having issues?
6

Dang, I just noticed a reply to this.

Yes, I was having issues. The circuit breaker to the far right failed and wouldn't allow current to flow to charge the batteries. It was masked because when I was on generator, the converter was picking up the load.

I replaced all of the breakers.

ramyot said:
I am currently replacing all breakers on my RG28 2019
all the connections are corroded so bad the studs' broke off
this thread has been helpful i wasn't sure what sizes to get
now to find where to buy them here in ontario
Click to expand...

Here's what did with mine - link to more pics 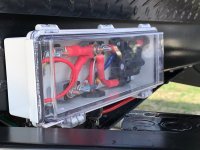 jbeletti said:
Here's what did with mine - link to more pics
View attachment 65679
Click to expand...

where did you get box

But it does make sense if the terminals are different colors and labels such as battery on the copper post.

In your picture - if the B+ was on the silver side and you had a direct short that bar would break the connection and possibly deform and hit the outer casing - which could be secured to metal framing.
6

Hi @porthole! That's a valid point and something I had not considered. There is always a reason why, but often the reason is rarely clearly stated.


Sent from my SM-G955U1 using Tapatalk
You must log in or register to reply here.