This is all after the fact information as I already resolved the issue but not without some serious fabrication.

On my TQ290 I picked up earlier this month I ran into a serious problem. After the PDI/walkthrough I set about installing the Equa-l-izer hitch brackets. I had asked for the dealer to let me do this process myself, not necessarily that I didn't trust them but I wanted to see first hand how the hitch adjustments effected the tow vehicle attitude, weight transfer etc. I measured the tongue and marked each tube at the 32" measurement preferred by the manufacturer. I started installing the brackets and quickly found a problem. At first I thought it wasn't a big deal and I would be able to reposition the brackets to be in the "acceptable" range, a minimum of 27" from bracket to ball center. In the closest position the brackets are 26.5" and the farthest position they are 33"+. Since the trailer was completely was empty and I wasn't going too far I just installed the brackets at the 26.5" position and drove it home.

Once I was home and had time to look at it I found the root of the problem is the forward most propane tank mount crossmember is located exactly in the "range" needed by the weight distribution bracket. One could argue that you could use a different brand of hitch that mounts on the outside of the tongue beams only, but I will save that for another thread.

After removing the propane tank cover, not a easy task by the way, I was able to examine the issue.
I own a small fabrication company and I was confident I would be able to quickly resolve this. After an hour of head scratching I still hadn't come up with a plan I was happy with. Originally I thought I could just cut a small portion of the channel section of the crossmember and allow the bracket to pass through it, I quickly abandoned that idea as I did not want to modify the frame of the trailer in anyway.

I was able to modify and reinforce the stock equalizer brackets to work but it wasn't near as "easy" as I had planned.
The pictures are very poor because they were taken at 10 PM when I finally finished but you can see the issue.

So... after that long winded explanation I would love to ask Lippert (who I believe manufactured the chassis) why not move the crossmember 1 1/4" to the front and allow there customers to use one of the major weight distribution hitch brands that doesn't require modifying the frame. Surely there are some criteria they use when designing a frame regarding WD hitch brackets etc.

Feel free to contact me via email or PM here.
weldonc(@)carterkraftcustoms(dot)com remove () in address.
VIN 5SFCB3621EE277054 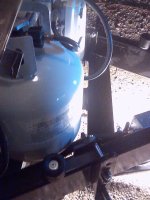 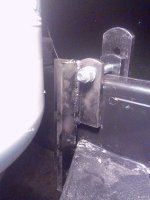 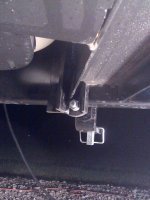 I wonder what model weight distribution hitch would work with it? We were considering to trade up for the 290.

RvBuddy not sure on which brands of hitches would fit. I was so sure the Equa-l-izer would fit I bought it from a online wholesaler and I was really shocked that the hitch will not fit as-is. I love the hitch so far and I wouldn't change anything if I did it again but I really think this is a issue that could easily be corrected.
The other hitches that use the chain style tensioner brackets that don't encircle the tongue tube might work but they might interfere with the fiberglass propane tank cover the 290 has. This cover makes the front of the trailer really clean and I think makes the trailer look one level up from the other trailers in the same class.
The other brackets I saw had to be bolted to the tongue, requiring holes to be drilled/threaded etc. that was not something I was willing to do to my new trailer, so any hitch that required that was completely out of the question.

I am the type of person that will research something for weeks prior to making a purchase and I did just that with the
equa-l-izer. I liked everything about it and much like the decision I made with ordering the Torque over a SOB trailer I will live with the consequences. If you are not capable a local welding shop and possibly your trailer dealer could modify the brackets as I did. I would really rather see Lippert make the change to the frame design to correct the problem in the first place though.

Lastly I looked at your trailer plenty and even thought about righting you on another forum I think in regards to the 261 Torque. In the end we decided on the 290 and I am glad we did. We love it, there are several issues with it regarding this or that but they are all understandable for the size/price of trailer. If there is anything you need to know and I could possibly answer about the 290 I would be glad to.
Last edited: Jan 6, 2014
B

I just bought a TQ290 and I'm going to pick it up later this month. Like RV buddy... I'm concerned about which model WD/SC hitches will fit. This is the "ask the factory" thread right? Any chance the factory could respond back?

I just bought a TQ290 and I'm going to pick it up later this month. Like RV buddy... I'm concerned about which model WD/SC hitches will fit. This is the "ask the factory" thread right? Any chance the factory could respond back?

This might be a question better answered by another owner. Hopefully someone can provide some advice.

Equalizer has instructions on their site offering solutions when there are obstructions in the desired mounting locations.
One option is t cut the bracket and weld to the outside of the frame.
http://www.equalizerhitch.com/pdf/v-nosetrailers.pdf option three in this alternate mounting guide is one example.

Other options are suggested on the equalizer site as well.
http://www.equalizerhitch.com/Equal-i-zer Support/specialinstall.php
B

Silverado..
Thank you very much. I guess I should have searched the equalzizer page first!
Picking it up March 1st.. can't wait!
Brian
You must log in or register to reply here.

C
Quality of workmanship by Heartland