Hello, relatively new still to our trailer. Bighorn 3670RL (2012). The trailer is permanently hooked up to a dump station. We leave the gray tanks open and regularly dump the black tank with a good flush. Today, the black tank valve didn't seem to want to close. Eventually you could hear a 'pop'. The black tank valve is definitely still open (at least somewhat). I have looked at several threads and videos. Replacing the valve doesn't seem too bad, but I'm hoping that I can potentially at least temporarily manually close the valve.

My questions: Where is my valve? Did the cable most likely 'pop off' due to blockage while trying to close?

Most videos, pics, and documents show a valve very near the actual outlet or external hookup on a horizontal pipe. I'm assuming ours is up above the underbelly covering? Is it on the vertical pipe?

The underbelly covering is one really large piece (the entire width of the trailer and 5 feet long). Can/Should I cut an an 'access' panel to assess the valve? (seems like a lot of bolts and a large covering to remove just to get to the valve) 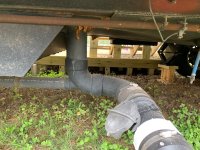 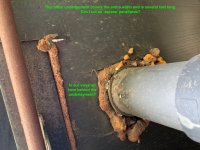 I owned a 2009 BH3670RL and yes, the black tank valve is located near that vertical pipe. If you remove the basement wall panel on the driver's side, you should be able to see it (but not access it), coming from the end of the tank. Before cutting an access panel in the coroplast, remove some of the screws holding it up along that area and pull it down to better visualize its exact location.

It's also not a great idea to leave the gray tanks open, even if connected to the dump station. Liquids will drain out faster than solids, which can collect at the bottom of the tank. Letting it fill, then draining gives it a stronger flow to draw solids with it.

It looks like you could install a master shut off valve on your sewer line where the cap is laying. This is in very common use as the plumbed in valves have minor problems. 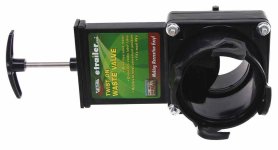 Removed access panel for a look. This is what I see: 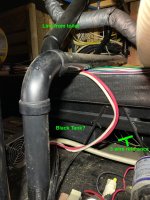 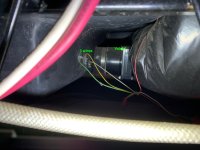 The underlayment was put on after before the plumping was connected. Thus, even if I remove all screws, I will still have to cut it somewhere to get around the pipe that goes down to exit the trailer. I don't want to cut it, but that seems like my easiest option. I think I can make a flap, and if necessary easily put another piece on the bottom side to help protect it.

I tried to make a drawing as to what I think this looks like: 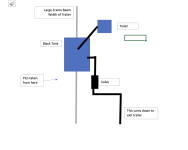 Edit - The underlayment appears to be one giant piece from that i-beam under the tank all the way back to the kitchen. Maybe I could take off a dozen bolts and bend it enough to get to the valve, but will still have to make at least one cut to get around the down pipe exiting the trailer. Still pondering my options here. *** This assuming my drawing is correct.

Edit - I believe the 'pop' was the cable breaking/dislodging from the back side of the house that holds the handle. It is no longer securely connected at that point.
Last edited: Nov 20, 2022
T

wdk450 said:
It looks like you could install a master shut off valve on your sewer line where the cap is laying. This is in very common use as the plumbed in valves have minor problems.
View attachment 67831
Click to expand...

I saw these in some of the videos I watched. I agree that I could install it at the exit point, but wouldn't that mean that 'black water' would be filling the pipe all the way up to the point of this new exit valve? i.e. What would I do with my current black tank valve?

If you put a temporary exit valve on, be sure you keep your grey tank valves closed until you open the exit valve to drain the black tank. You don’t want to have your black tank back up into your grey tanked. The cable secures to the black tank valve with a set screw. It’s very common to cut a three sided access in the coroplast and close it with 4” gorilla tape. Oh, more than likely, will need to access the valve to determine what the pop was.


Sent from my iPad using Tapatalk

Yep, the black tank is the one under the floor extension. The gray tank for the bath is under the basement floor. To access the valve, you will need to cut a 3-sided access flap (uncut side towards the nose). To close up the flap when done with the repair, you can attach strips of wood around the inside edges, projecting into the opening and screw the flap to it. Then use scrim tape to seal it.

Thanks for all the information. The 'pop' was the cable on the backside of the panel where the handle is. I did not take a pic, but the outer shell disconnected (tore?) from the threaded part that goes through the wall. Thus, there was no tension when pushing the valve to close. The whole cable and outer shell just move. I kind of held the cable/outer shell in place and had my wife push the valve closed, and that worked. So, we can use the black tank for now. Ordering a valve and cable tomorrow. Will cut the underlayment for access, replace the cable (assuming that is all I need based on today), and seal with something appropriate. Thanks again for the advice.

The link will get you to scrim tape. Many owners have used it for this type of repair. Good stuff, better than Gorilla tape for this application. Just be sure to thoroughly clean the surface before applying for best results.

do what you can to NOT remove the corroplast from the bottom.... cut it so you can fold it open, and then seal it back with duct tape when you are done.... its difficult to get the corroplast resealed at the edges without making a mess, and if it isnt sealed, you will have a dust problem inside the trailer if you ever travel a gravel road....
you can have many access holes cut in the corroplast, but as long as it remains securely attached around the edges, the duct tape will keep the access holes sealed.... and as the corroplast is the plastic version of cardboard, and if you pay attention to the grain of it when you cut a hole in it you will have an easier time of it... ive seen several times where someone had cut it in a manner that made it difficult to fold open against the rigidity of it...

After you dump and flush the black tank...tilt your trailer up on the valve side some to avoid any unwanted "drips" while removing the valve.
You must log in or register to reply here.