I recently had an issue on my 2015 Landmark where the residential refrigerator would shut off by itself. It was the only piece of equipment in the RV that wasn't working while on 120V shore power. The issue was difficult to diagnose because the power would come back on it's own before you could run through all of the troubleshooting steps.

The first time it happened, I focused on checking the fuse panel and then wiring under the slide to see if I could find the issue. As I was pondering what to check next, the power came back on it's own after I flipped all of the breakers off and then back on to cycle power within the system. Magically, the refrigerator power came on.

The second time the refrigerator cut out, my wife was bringing the slide in to prepare for a move. I had her open the slide up and I began to troubleshoot again. I did see that the work box furthest toward the front of the trailer, under the kitchen slide, provides power to the microwave and refrigerator. The microwave line was hot, but the refrigerator line was dead, so the issue was inside the RV with no power coming out. We decided to move to the new campground with no power for our refrigerator. It was cooler outside, so we figured the fridge would hold until we got to our next stop.

Once we arrived, the refrigerator came on without any issue, so I had to wait for the issue to show itself again. I was lucky to be doing some work in the morning and I was looking at the refrigerator as the power went out. I already had the access cover for the transfer switch for the inverter open with wires exposed, my multimeter was set up and just needed to be turned on in the bay, and I was able to verify that 120V power was coming into the transfer switch, but no power was coming out. I then turned on the inverter, and I still couldn't get any 120V power on the outbound let of the switch.

I ordered and installed a new Magnum CSW-TS15 Transfer Switch. As I installed the switch, I also found that my deep-cycle batteries were failing too. They showed 13.2V, but they weren't holding a charge. I replaced them as well and we haven't had any issues with the refrigerator since.

Glad you figured it out. We have seen a handful of reports on those small transfer switches failing after a while.

The 13.2V you saw on the battery was actually the output of the Power Converter when plugged into shore power. If you happen to take the voltage reading while connected to your truck, with truck running, you might see 14V DC coming off the truck's alternator. When disconnected from shore power and the truck, allowing a few minutes for "memory effect" to fade, you'll get the voltage from the batteries alone.
D

I had to replace the transfer switch for our residential fridge within the first 2 years of service. Luckily it was only about $75 for a new one. The difference in the model you have and ours is our has connectors installed on both lines.

How did you find out if it is the transfer switch? I believe my issue is the inverter itself.. since there is no power to it.. I am going to unplug the transfer switch and plug that into a heavy duty extension cord and then into an ac outlet.. to see if the fridge does come back on I have shore power 50 amp. Everything else is working fine.. but the fridge.. it went out last week.. then when we came back, it was on.. was on this morning as well, then nothing..

When shore power is removed - the transfer switch should flip over to pick up 120V from the inverter, which in turn gets power from the batteries.

If while not on shore power, you're planning to unplug the transfer switch power cord from the inverter and plug directly into another outlet, and the refrigerator gets power, that would confirm you have no output from the inverter.

There is a block diagram and a diagnostic flowchart in our Residential Refrigerator Guide in this folder.
D

If no power to the inverter look at your batteries, how old are they? Are the batteries in good condition or need replaced?
J

If no power to the inverter look at your batteries, how old are they? Are the batteries in good condition or need replaced?
Click to expand...

Batteries are less than 4 months old. Shows they are fully charged
D

You said no power to inverter, and batteries are good. One thought is the battery disconnect switch on? Then follow the cable from the disconnect to the top of the inverter. In line is a fuse/breaker in a rubber boot, on my setup at least, So check all that if you would please and let us know
J

HI there.. I spent about 5 minutes looking for that fuse.. did not see any place it would be.. Disconnect switch is on. I did unplug the transfer switch from the inverter, tried to power on the inverter again by doing a soft restart, by holding power button down for at least 15 seconds. Not even a peep from the inverter.. My understanding is I would only need the inverter, if we do not have shore power. Which leads me to believe the transfer switch is heating up.. shutting down the fridge.. then when it cools, the fridge comes back on

jimcat said:
HI there.. I spent about 5 minutes looking for that fuse.. did not see any place it would be.. Disconnect switch is on. I did unplug the transfer switch from the inverter, tried to power on the inverter again by doing a soft restart, by holding power button down for at least 15 seconds. Not even a peep from the inverter.. My understanding is I would only need the inverter, if we do not have shore power. Which leads me to believe the transfer switch is heating up.. shutting down the fridge.. then when it cools, the fridge comes back on
Click to expand...

1. After holding the inverter power button for 15 seconds, did you measure voltage on the inverter outlet?
2. If the inverter GFCI outlet has tripped, in order to reset, the inverter must first be turned ON and then press the GFCI reset button at the outlet.
3. If you want to test the transfer switch, unplug it from the inverter and use an extension cord to power it from a known working outlet. Test that outlet with a light or something before plugging the transfer switch into it.
4. If you don't have a volt meter, try to find another camper who has one and can help you take measurements.
5. Below is a typical installation (from a 2014 or 2015 Landmark I think) showing the high amperage fuse. Your installation may look different but should have the same components. 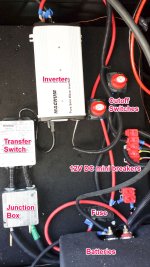 I snapped off photos.. I will send those later. As I mentioned, there seems to be no power at the inverter. I have tried soft reset and hard reset according to Magnum. Still nothing.. I pushed the gfi.. tried the reset, nothing. So, it appears that the inverter is not functioning.. Since I have not located the fuse.. but I will, I will try to replace that.. see if that changes things to the inverter.. I did bring a out door extension cord.. to plug the Transfer switch into.. but, when I got back to the RV with it.. the Fridge was back on. Now, before I left this morning.. I unplugged the transfer switch from the inverter.. fridge stayed on. I do know my 50 amp power cord needs attention, as I jiggled that a few times and the electricity came on and off in the trailer.. now, I do not believe it is at the power pole.. as I only moved it a little at the reel, not enough to disturb it at the pole. I know the retract switch for the reel is not working.. so that will get repaired soon
You must log in or register to reply here.