I wonder if the hitch had stayed attached if the outcome would have been any different.

In the comments section:

"Update to incident: I was traveling 40 mph and the light went to yellow switched in less than 2 seconds. I did run the light, it was my fault 100% however after talking to CHP he says these lights are not timed correctly. I could not stop in time, I laid on my horn for what seemed forever (no eye contact from driver) He rear ended the back of my bed. Very scary my son (8) and daughter (5) and wife are all okay. I’m a good driver however today was not my day. It could of been a lot worse. Thank you for all the kind words. See you all soon!"

Glad you guys are ok trucks and rigs can be replaced. Godspeed......

Wmnmy said:
Glad you guys are ok trucks and rigs can be replaced. Godspeed......
Click to expand...

Not our truck and trailer - California incident.

2 seconds between light displays on a signal cycle would mean this road has a 20 mile speed limit. Given two lanes with a white dashed line I highly doubt the posted limit is 20 mph. If a 2 second cycle is correct, the short cycle would provide inadequate time between perception/reaction. Considering a high deceleration factor with the Cyclone in an emergency stopping situation, it makes the account given by the operator highly plausible. The light signal could very well be the primary contributory factor.
M

Same thing ours did a couple years ago when we t-boned the van. Rails look almost the same.

Also, and I know it's not a priority after getting your family out of a wrecked vehicle, but FYI on Fords, pressing the hazard signal switch stops the horn from beeping over and over. 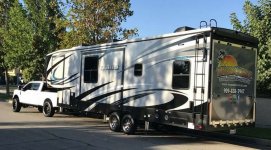 So, best I could tell, he ran a red (due to a short yellow cycle) and realized side traffic was starting to move but not looking his way. Vehicle from the right tagged his pickup truck bed in front of the rear axle, which pushed the axle back on that side and sent his truck swerving to the right, breaking the hitch free and flopping the truck over on its side underneath the front overhang of the fiver.
H 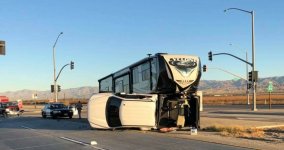 porthole said:
I wonder if the hitch had stayed attached if the outcome would have been any different.

I watched the recovery video of this incident..It ripped the rear rail completely out of the truck bed and bent the front one like a horseshoe.the hitch unhooked from the rails and was still attached to the trailer pin.Also ripped the rear end out of the truck,broke suspension hangers on passenger side,drive shaft was unhooked from tranny.unit was a 2017 F 250.
There was some front enf scratching to the nose of the trailer.
F

2017 superduty 250 with a 2 axle toy hauler should be fine. I also wonder what a puck system would like like compared to those rails. The frame on the new trucks are beefed up compared to previous generation fords.
C

I was thinking the same. A puck is possibly could have been better.
M

Another takeaway from the hitch ripping from the bed - now’s a good time to rethink your strategy for hooking up your breakaway cable if you currently hook it up to part of your hitch (like we did for three years).

MCTalley said:
Another takeaway from the hitch ripping from the bed - now’s a good time to rethink your strategy for hooking up your breakaway cable if you currently hook it up to part of your hitch (like we did for three years).
Click to expand...

what a mess.
M

When we t-boned a vehicle a couple years ago, we had more than enough hitch. Rails and mounting system were rated by Reese for up to 24K. We had just installed a new 20K Reese hitch (replacing the previous 16K Reese hitch) a couple months before this happened. (Our trailer, a BC 3950FB, weighed right around the 16K GVWR). The hardware used to hold down the mounting rails, however, were questionably not adequate.

Note that the rear rail sheared the mounting bolts and pulled up from the bed. The front rail stayed in place, but the pins holding the hitch to the rail pulled clean through the hitch mounting lugs.

Here's what the frame-mounted base looked like (this is the rear part, behind the axle). You can see it flexed some before the frame rail bolts gave way.

I contacted Reese asking if they'd like to see pictures and they said yes. I never heard anything back from them. I'm sure their legal department would probably suggest not replying afterwards. Truck was totalled, trailer was eventually fixed and we moved on. (We have a B&W hitch in our current tow rig now).

Staff member
Thanks for those pics Malcolm. I was wondering why, in the video, the front rail was still in the truck rather than pulled out like the back one.
Must have pulled through the leg mounting hole like yours did.

Peace
Dave
You must log in or register to reply here.