Heaven gained an angel on Sunday with the homecoming of Beulah (Boots) Burnette.

Beulah was the mother of friend and Heartlander, Howard Burnette. Many of you may have met Beulah at rallies in the east and in Goshen.

Beulah lived with Howard and his wife Kathy for the past 11 years. We were blessed to be their "across the street" neighbors in The Gardens RV Village in Crossville, TN for several years.

Beulah was such a nice person and will be missed. Condolences to Howard and Kathy, and Prayers to all of the family.
Last edited by a moderator: Jul 22, 2019

Rest in Peace Boots. Prayers for friends and family. 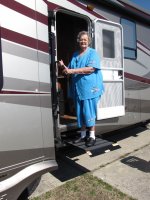 RVing can make dreams come true. To Beulah Burnette being an RVer was a dream in itself. Beulah and her husband wanted to RV but never at same time. After his death that dream seemed impossible. She moved to Richmond, Virginia for us to take care of her and we bought our Landmark. So it was on the road!

Beulah went to Virginia and Tennessee rallies and the International Rallies in Goshen.


Some of her favorite RV moments:


2010 Nashville Rally - The Grand Ole Opry and Beulah shared the same birth year of 1925. As a young girl she wanted to play the fiddle but could not afford lessons so she became a faithful listener of the Grand Old Opry. In 2010 she finally got to attend the Opry. Our little Rosie, our 5 pound Yorkie, had a serious back injury and Kathy was so upset that had Debbie Clause not intervened we all would have missed the Opry. Marty Stuart and Little Jimmy Dickens were among the musicians performing that night.


Urbanna Virginia Rally 2014 - Beulah was determined to participate in everything she could. She even played miniature golf at the campground in the rain under an umbrella using her walker to go between the holes. She even got a hole in one.


Goshen Rallies
She enjoyed the meals and the entertainment. Her favorite part of the rallies was "Heartland Gives Back." Beulah would knit baby hats between rallies.


A big part of RVing is the people you meet. She met many wonderful people who were so kind to her. There are too many to mention them all. However special mention goes to Jim and Nancy Beletti. They always treated Beulah with kindness and respect. Jim was always mindful of her handicap and made a special effort to give us a campsite which would make it easier for her to participate in the rally events.


Dorothy and Eric Van Opstal kept in contact with Beulah between rallies. Dorothy would make sure Beulah was comfortable and even changed the location of the meal for the "Heartland Gives Back" so that Beulah could attend.


There were many other acts of kindness expressed to Beulah for which we are grateful.

Howard - thank you for all the kind words and for sharing Beulah's RV stories. Very touching.

I'm hoping to see you, Kathy and Sophie on the road in the next year or so. And I am way overdue to pop back to The Gardens to visit all our old friends and neighbors there.

Dorothy and I are so sorry to hear of Beulah's passing, our sincere condolences to Howard and Kathy for their loss. We pray that our Lord wraps his loving arms around them and gives them peace and understanding. We will always remember Beulah for her kind and generous spirit, such a loving and inspirational person. She overcame her handicaps and with the loving help from Howard and Kathy was able to enjoy the RV style of travel. We feel truly blessed to have shared precious moments in Beulah's life, may she now rest in peace.
You must log in or register to reply here.