Slide out, stabilizers, and jack all stopped working

At first the slide out stopped functioning. I had to manually close it.

Then three weeks later the electric hydraulic jack stopped while I was extending it so I can get it off the ball of the hitch. It stopped about 1.5" short and wouldn't retract or extend anymore.

I then realized my two electric stabilizers wouldn't work either.

I feel like all of them are related somehow and I haven't figured out how. We bought this trailer (our first ever trailer) last year so we have been learning as we go. I am a master electrician so I have checked and tested every fuse and breaker within the interior panel.

The part I am not familiar with is the exterior equipment by the battery. Under the toy hauler is this black liner type stuff. Do I remove this to expose all wiring? I am trying to find a wiring diagram online as well to help figure out where all these external motors get their power from.
H

I finally ran across this. Does most owners have these manual reset breakers by the bus bar? I remembered seeing these red covers today under there but didn't know there was a button. I will be checking tomorrow ☺

Staff member
They're all powered by 12V DC, which primarily comes from the battery. There are some 12V DC mini-circuit breakers near the battery that provide power to the high-current devices like jacks, stabilizers, and slideouts. There's a good chance that the Power Converter output isn't getting to the battery to keep it charged. One of those breakers is a manual reset. If it trips, the battery will continue to power those devices, but it won't get recharged other than perhaps from your tow vehicle while towing. But that's not much of a charge.

If interior lights work while on shore power, but go out as soon as you unplug, that's an indication that the Power Converter is working but the breaker is tripped. There are usually several breakers in a row, near the battery, covered by a red rubber boot. One has a teeny-tiny reset button. 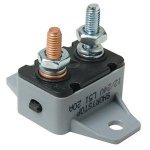 This picture below is from a 5th wheel and your layout of breakers is likely to be different. Look for thick wires and you should find the breaker with the reset button. 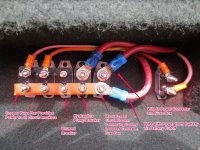 Staff member
There's a lot more info in our Electrical User Guide in this folder.
You must log in or register to reply here.

Z
Two questions - Slide out not sealing, and power to slide out

M
Had an accident with my new camper yesterday, I removed the door when i put the slide out.