Last fall I found a stash of pine cones in the basement area while doing some service work on my 2014 Bighorn 3010 with 3 slides. As a matter of fact, the little red squirrel was busy stashing as I was working on it. He would run right between my feet as I was working and disappear underneath the coach.. I immediately stopped what I was doing and sealed any and all openings I could find in the underbelly, and while I was at it, he jumped up on the wheel next to my head and disappeared. I got a light and looked up over the wheel well and there was a large oval opening for the slide ram to travel through the channel frame. There is one on each side of the coach controlling the two main floor slides, easily accessible to large rodents. I had previously assumed that those openings would be dead ended behind the frame, but I was wrong. Those openings give vermin access to the entire basement area and boy did that little bugger ever have a hay day. I collected two five gallon buckets of pine cones out of there, and that was just the ones I could reach. He even packed all the shoes in my custom made shoe drawer tight right to the toe with cones. I won't be hanging one of those pine fragrance tree thingies in there for a while. Fortunately there was no access to the main coach area from the basement, so it was contained within that area.
I remedied the problem by gluing (rubber glue) a rubber membrane (pond liner) around the ram and over the opening, and backed it up with a thin piece of plywood (no scratching the ram) cantilevered on one screw (for movement) over the membrane. Mister squirrel was some ticked when he could no longer access his winter abode he was preparing - I got a lot of chatter.
I had previously trapped 2 mice in the basement storage area (I always keep a trap set in each area) and could not figure out where they got in, but I would hazard a guess that it was the same opening. If you have hydraulic slides on your rig I would suggest you inspect this area and do the pro-active thing and block it if the manufacturer has not done so. I have attached a before and after picture of the area in question.
I can be reached at dougfyfe@shaw.ca if you have further questions.

Staff member
I've sealed mine with an inner tube cut to size.
I do like what you have done with the plywood cover and only one screw to allow for some up and down movement that the ram makes.
Nice job.

Good work on sealing up the ram openings. I heard some critter inside the rear wall near the power inlet chewing away during the night last week. I beat on the wall in the area with a broom handle as a temporary deterrent ( I had to do this several times during the night ) then looked inside the skirting at the electrical wiring and could see no damage, installed some rat/mice bait in the area (supposedly the bait makes the critters thirsty and they leave the RV in search of water to die outside), sealed up the openings in the skirting there, and sprayed the rear stabilizers, front landing gear, and wheels area with a strong peppermint spray that Tomcat brand rodent controls sells. I plan to spray any time I set up from now on in parks where I have had rodent problems.

Now if I could only solve the blue jay problems in this Southern California mountain park. The jays naturally fall harvest the football shaped acorns from the trees, peck holes in the sides of the pine trees, and insert the acorns. Unfortunately the pine trees are full of stored acorns, so the the blue jays kept sticking the acorns in any small crevices they can find. That includes my truck hood creases, and those acorns make their way down the door frame to the triangle-shaped crevices at the bottom. I have dug the acorns out of these crevices weekly since I have been here. They also stick these acorns into the crevices around the power mirrors. Last night I came home late to a chilly trailer, turned on the furnace for the first time in months, and was greeted by the clatter of acorns in the inlet/outlet tubes of the furnace. I have wire mesh for the furnace exterior pipes, but may have to end up tarping my truck when it is parked here. I also have to clean out under the top slide seals with the manual awning rod before bringing in the slides pre-move Monday.

On edit: I took some pictures of the tree/acorns/truck this morning 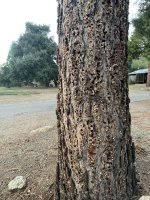 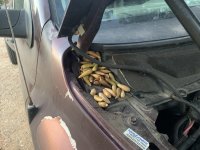 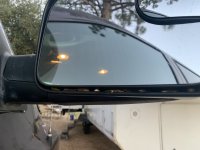 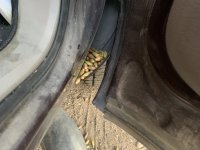 That reminds me, it's time to put the Death Bucket in ours for the winter!
You must log in or register to reply here.