A warning to anyone with Jensen outdoor speakers fitted to your rig to carefully inspect them. I have two MS5006B outdoor speakers fitted to my 2013 Big Country and a week ago I noticed that there was a bulge in the wall underneath one of the speakers. Suspecting the speaker was leaking I pulled it off to discover that the membrane surrounding the cone had completely failed and was allowing water to get in and causing delamination of the side wall.

"The JENSEN MS5006B black waterproof speaker is specifically designed for outdoor entertainment. This speaker is completely waterproof and engineered with UV resistant materials to withstand the outdoor elements."

I rang ASA and they were totally unhelpful. At first they tried to get me to go back to my dealer which is totally impractical as the dealer is hundreds of miles from where I am and getting further away. Secondly they offered me a discount on one speaker and then a free one if I bought two.

They were totally uninterested in the fact that these speakers had failed in less than 2 years and as a result had caused damage to my sidewall and refused to let me speak to someone with any authority.

I strongly advise anyone who has Jensen speakers to carefully inspect them to see if the rubber seal around the cone is still intact as when it fails significant damage is likely to occur.

I will be replacing these with marine grade speakers properly designed to withstand the elements. These clearly are not.

We had to replace both outdoor speakers on our 2012 Big Country. Both failed and the cones were just barely hanging on. So far,there was no de-lamination damage.

I also replaced mine after less than one year because they too were blown out and the sound was very distorted.

I used 6" Kenwood Marine grade speakers made for boats that I purchased from Bass Pro Shop. The sound and quality of them is 300% better. I did have to enlarge the opening slightly.

It is cheap insurance to take out the speakers and put metal tape around the cutout wall opening so that any water intrusion goes all the way inside and has no path to get into the outer or inner walls where it can do damage. You may want to just buy new speakers and upgrade at the same time. A company called Parts Express has some great sounding speakers for great prices. As stated by others the OEM speakers Heartland used were shot in less than 2 years on my trailer and I replaced them with these: www.parts-express.com/pyle-plmr52-5-1-4-marine-coaxial-speaker-pair--267-795

Now that said speakers on the outside vertical wall of a trailer is a worst case scenario for speakers in outdoor environment and I won't be surprised if the Pyle ones I have now won't fail fairly quickly too. But for now they are still good after 1 year in the weather and sound a lot better than the original ones did.

It's completly wrong to make a 5 inch hole in the side of a unit and install a $10 speaker to cover it up.
Mine failed on the first year and the year after.
Went through 2 more better Pyle unit so far.
Had to realy fill the wall cavity with caulking and still see a delaminating bulge.
Just ordered a flush mount kit. And will patch the hole and install the boxed unit above.
My assumption is that the speakers get damaged by closing and opening the slides without proper air ways.
With opening the door completely no speakers failed last year.
So beware of those speaker installation.
I have seen SOB installations, and its far superior.
Also a rubber seal speaker liner should be used like used on car doors.

I noticed on my last trip that a silver trim part had come loose on one of my speakers. I was going to get into it this time home. Good timing on the post!

one of my thoughts was to somehow seal off the whole speaker as we don't use them. Anyone ever do this? There is the obvious problem of the "hole" but thought I might try covering the area under the grate with something.

I will try to cover inside and outside. Inside is hidden by the bedroom dresser so covering is easy, and outside I will install the larger flush mount speaker box used on Keystone RVs.
Before mounting the speaker I plan to fill hole with none expanding foam and trim to suit and seal it with the proper included speaker box seal included in the kit.
Just bought the speaker kit on Ebay for $36.

You could seal tight and use the speaker grill to hide the repairs or install the box like I did. Sure inside is well finished.

Also using the speaker box makes it easier to cover speakers when washing the unit. I plan just using a plastic bag held with bungee.

Sent from my LG-LS720 using Tapatalk

Moved on to the next thing...

Not sure what to tell you to do . . . other than replace them with something good as your dealer probably won't help you out with a fix!

They slapped a band aid on the problem . . . and told me all was good!

Having bought many car stereo's and speakers back in my younger days, I learned early that all Jensen stereo systems and speakers are junk. Always have been, always will be, but they seem to be the only company that sell the all-in-one systems that RV's have. The only option is to buy components and replace the **** that comes with these RV's. I have a buddy that bought a Pontoon boat and it came with a Bose system! No reason RV manufacturers should be putting this junk into their RV's. At least give the buyer some options to upgrade the systems if an RV is ordered. The problem for many people is that they aren't handy with the electrical connection part or they aren't handy with the modification usually necessary to fit things into the panel where the Jensen unit sits, so they live with ****** sound and the periodic replacement of speakers and units because it's pretty much plug and play. For those people, my suggestion would be to skip doing that and don't go to the RV dealer. Have a car audio guy do the install. They know what they're talking about and you'll be amazed at the quality of sound. For the rest of us......Open a beer, get your hands dirty and replace that junk once and for all.
Last edited by a moderator: Mar 13, 2014

Believe it or not Jensen is middle of the road and there is worse stuff out there. Don't believe me, I've got a Touch Audio system in a box you can have. Bought a Jensen off eBay as it was much cheaper then anything else out there. The difference in sound quality was amazing. It's not the competition calibre I used to build, but I'm not 19 anymore either.

Other option for RV systems include Genesis, Touch Audio, Concertone, Elite, iRV and Linear. There are a few more I've found as well.

Lots of RV specific brands out there, more then just Jensen. For the price point and features I'm happy with a Jensen and it was a definite upgrade in my case.

If you really want quality sound at a reasonable price pick up a "Home Theatre In-A-Box" from a recognized brand and install that.

There's a factory recommendation. Pre-wire and allow space for actual components and speakers. Offer 5.1 and 7.1 configurations with brackets mounted to the wall or ceiling. I know you can have it done on a park model, why not a towable?

Moved on to the next thing...

The problem I had with my outside speakers was that they were wired wrong . . . out of phase!

At full volume you could barely hear them.

I was going to rewire them myself . . . but when I pulled the Jensen base unit out of the wall to look at the wiring . . . I couldn't make sense of the wiring, despite having a diagram on the back of the unit.

What I found interesting was that the speakers had strange wire used for them . . .

And I couldn't tell which wires went to the outside speakers (until I replaced the inside set of speakers, of course)!

I find it very interesting that our trailers come out of the factory with wiring jobs like this . . .

And I was actually amazed that the dealership actually got the outside speakers to work right!

However, despite being able to hear them . . . they still sound terrible!

I've found that I rarely use them anywayz . . .

Our Trail Runner has two entrance doors . . . and when the rear door is propped open, which is almost always while we are camping and at the trailer . . . it completely blocks one of the speakers, as can be seen in the photo below: 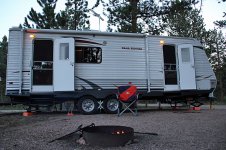 My TT was a hodgepodge of wire and colours too but it was discernible. Same out of phase problem.

When I had the TouchAudio the outdoor speakers would randomly turn on an off. I has to disconnect them to stop annoying neighbours while watching a movie.

My NT also has struts on the doors (mine has front and rear door also) that hold the door open perpendicular to the TT. This could solve one problem.

I saw no signs of leak or delamination last year but I am a little concerned now.

One thing to remember is to maintain the caulk on top of the speaker grill. It's hard to see from ground level.


Sent from my iPhone using Tapatalk
You must log in or register to reply here.