Hello! While the Oakmont may no longer be in production by Heartland RV's, there are still a ton of them out there, and have really awesome features. We picked up this really nice 2016 375QB bunkhouse model back in December of 2020, as it has four bunks in the back which was PERFECT for our four kiddos!
As with anything, a little modification, organization, and customization can provide a TON of efficiency and improve our camping experiences. I'm starting this thread to show our modifications along with some of the tips and tricks we've figured out along the way. The previous owners threw in several of their accessories which they had no use for (power cords, water hose, tripod, and a few other things), so we were kind of ready to go right from the start.

I'll start with a picture of the day I drug it home. It was my first time hauling anything quite this big, through Phoenix rush-hour traffic no less, talk about trial by fire ! 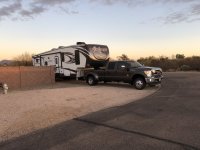 After giving everything a thorough and deep cleaning, we set to work on our first real "modification". Our kids are pretty young, and still move around a bit when they sleep, so we were concerned about the one in the top bunks rolling out of bed. I built these rudimentary "rails" out of pine. I used my handy Kreg pocket jig to conceal the fasteners; I mitered all the corners to prevent any open loops or loose clothing from getting caught and presenting a hazard to the kiddos. The passenger side rail is fixed and screwed using existing fasteners in the bunk, however the driver-side bunk folds up for transport and needed to be easily removed. I came up with this little "clamp" so we could quickly install and remove it. The exposed knobs are a concern for snags or whatever, but at least they're low and on the outside away from clothing and bedding. 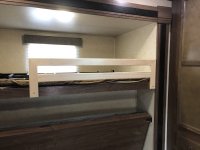 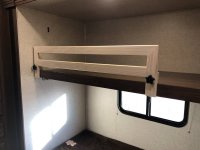 After our first weekend (shakedown run), we made a list of everything we needed, must -haves, want-to-haves, sure-would-be-neat-to-haves, and so on. First on the list was new mattress or mattress toppers for the crappy mattresses in these RV's. We opted for the Zinus memory foam toppers. Trimmed some off for the master, and replaced all of the bunk mattresses. The kids are much happier sleepers now... 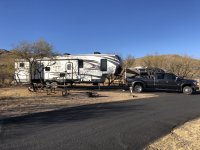 The second thing on the list was additional blocking for the leveling jacks for when we are on sloped sites and to help improve the trailer stability by not extending the jacks out so far. These are 15 1/2" x 15 1/2" 3/4" pressure treated plywood, 4pcs glued and screwed together with a piece of 3/4" rubber stall mat from TSC glued and screwed on top and bottom. These are 4 1/2" tall and spread the weight out nicely.

Power Management/Surge Protection: After a bunch of research and discussions with several RV-ing friends, we decided on the Hughes Power Watchdog 50A. It had a bluetooth app which monitors and tracks your usage, as well as sends you alerts if something is not right.

Up next was tires. The tires on this rig were about 2 yrs old when we bought it, and I was hoping to get this season out of them (a third year), after our second trip out, we discovered the left rear tire was beginning to separate right as we pulled into the driveway - disaster narrowly averted! We purchased a set of Sailun S637 ST235/85/16 Load range G tires, and a TireMinder TM-88C - peace of mind restored! 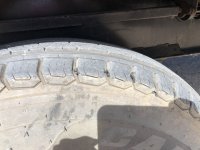 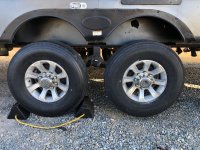 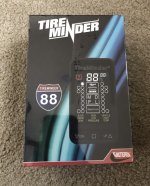 Very nice. Thanks for sharing.

Last weekend, I finished updating all of the marker lights to LED. The marker lights received retrofit LED bulbs, but I chose to completely replace the taillights. These lights are MUCH brighter and more visible - something which the original lights were definitely not. I wanted to make sure drivers behind us could see when we are slowing or signaling. Instead of the twisty wire nuts confusedused by the factory, I soldered and applied adhesive-lined heatshrink to all of the connections for added durability. 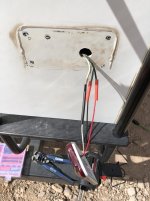 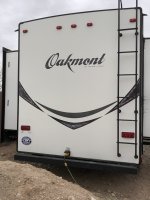 Front storage area organization. Cords and plugs laying in here drove me nuts, so I got some canvas hanging straps and hooks, as well as broom holders to hang up the cords and organize the power adapters up off the floor of the compartment. We don't have an integrated generator, but I keep the Cummins/Onan P4500i up here in this compartment, strapped down for transport. My next task will be to organize the left side of this cabinet; the hydraulic hoses and wiring for the Leveling Jacks/slides is a complete mess. I'd also like to clean up the batter cables and go to 4 or 6 6V batteries. 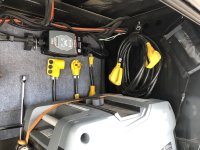 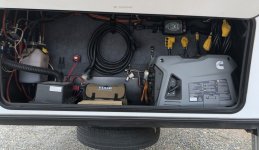 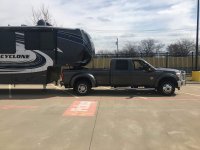 Thank you, and same to you!

I've made some mods to the truck also, with many more planned, maybe I’ll post those as well.
Last edited: Jul 9, 2021

JohnU said:
Thank you, and same to you!

ive made some mods to the truck also, with many more planned, maybe I’ll post those as well.
Click to expand...

Very nice job w/ upgrades! If you haven't done it or not done already, consider adding wet bolts in suspension along w/ at least a MorRyde CRE 3000 "rocker" equalizer in susp as well.

NYSUPstater said:
Very nice job w/ upgrades! If you haven't done it or not done already, consider adding wet bolts in suspension along w/ at least a MorRyde CRE 3000 "rocker" equalizer in susp as well.
Click to expand...

A wet bolt kit is definitely on the list! I have the Dexter E-Z flex equalizers on each side now, is the MOR/ryde a substantial upgrade over that?

Very nice upgrades! I'm sure you have more on the list to go, keep 'em coming.
N

JohnU said:
A wet bolt kit is definitely on the list! I have the Dexter E-Z flex equalizers on each side now, is the MOR/ryde a substantial upgrade over that?
Click to expand...

Ok my bad, I didn't happen to see the E-Z Flex. I cannot answer your question as I don't have any knowledge on Dexter's E-Z Flex so someone else will have to. I watched Dexter's video on it and noticed here that they didn't even have wet bolts installed. As for the Dexter VS MorRyde, I can only speak of the MorRyde and will say that things stay in place. DW has a multi knife/kitchen utensil thingy on the counter by stove (which is above the axles) and it never moved all the way to FL and back.

Latest upgrade as of yesterday. I'm super excited to give this a try and see how much it improves the ride!! 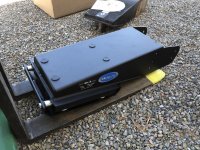 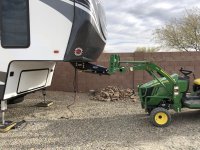 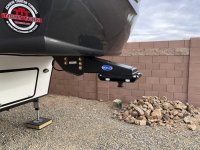 14-July-2021 EDIT:
We recently completed an AZ-to-IL and back roadtrip with the 5th wheel covering more than 3200 miles. The MorRyde pinbox performed flawlessly and definitely improved the ride. I highly recommend this to anyone!
Last edited: Jul 14, 2021

It’s been a little while since I’ve updated this thread, but I do have a few mods to add since the last time. We’ve been doing more boondocking and as a result added a second house battery. I used a storage tote from Home Depot and grafted the vent connections into the bottom and the lid to keep any vented gases out of the living quarters. I also added a solar port to the side of the trailer to plug in my solar suitcase. 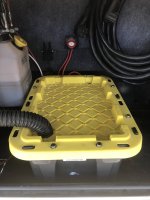 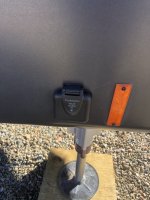 I elected to stick with FLA batteries for now, but I am starting to research a larger roof-mounted solar array, LiFePo and associated electronics installation, but that may be a ways down the road.

I almost forgot another fantastic upgrade - though it may not be for everyone... I replaced all of the springs, bushings, equalizers and hardware. I also went with the longer shackles from MorRyde, and WOW, what a difference in ride. It's Significantly smoother over railroad tracks and bumps now than it was before. 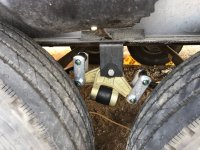 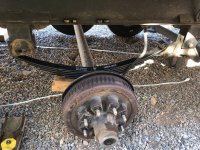 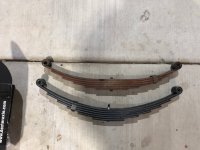 And, the tow rig got new shoes! 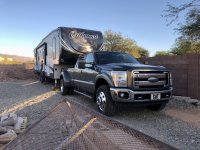 D
Ceiling water damage - attic vent cap flew off and rain got in!

Day/Night Shade No Spring and Screwed Flat against the wall

C
How to fix leaking pex in shower?