Looks great! Was that from the factory or something you found?

TravelTiger said:
Looks great! Was that from the factory or something you found?

Were you referring to the beer? Thank you! I ordered it from the factory.

Nice job.. What a difference that makes.

jesstalkn said:
Nice job.. What a difference that makes.
Click to expand...

Thank you. We hope to be able to find a bit of time to chat with you in Vegas, get some more ideas.

Looking forward to meeting you and so many others.
It's going to be a blast.

Sent from my XT1254 using Tapatalk

I was trying to figure out what to do with my wash pole, walking stick, umbrellas, and the extendable pole for the widow squeegee. I found these at the HD and they fit perfectly across the front storage compartment. 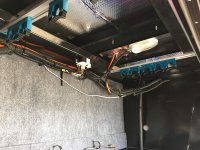 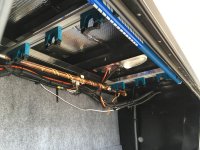 Nice job. Do they hold going down the road ?

Sent from my XT1254 using Tapatalk

I will find out in a couple of days. They are a tight fit.

jesstalkn said:
Nice job. Do they hold going down the road ?

Sent from my XT1254 using Tapatalk
Click to expand...

Happy to report nothing fell out of the holder.

where you got the exact match back splash?


Shortest Straw said:
Added some more back splash today among other not so visible things.

Pirana said:
where you got the exact match back splash?
Click to expand...

Ordered it from the factory.
P

I was in the process of doing some front closet mods and got side tracked. I noticed the box for the washer/dryer connections was away from the wall and loose as well as the little trim/corner piece on the opposite side. I decided to pull the cubby in the back of the closet out to see if there was any backing to screw the a fore mentioned items into. There is, the assembly folks just didn't get it right. What I also found was open space between the back wall of the closet and the cap. 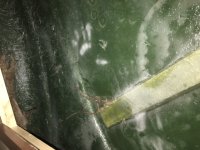 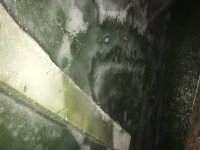 There are two 1 inch thick pieces of insulation on either side of the closet and that is it. Insulation must be expensive in Indiana. My next mod will be to rectify this situation.

I have a question, to all the "modifiers" out there!! .. What are the limits on modifications that you can do w/o screwing up your warranty?? ... I.E., If I wanted to clean up the wiring behind the basement walls, and move the basement walls for more storage, would that be a deal breaker for warranty coverage???

Bill n Sue said:
I have a question, to all the "modifiers" out there!! .. What are the limits on modifications that you can do w/o screwing up your warranty?? ... I.E., If I wanted to clean up the wiring behind the basement walls, and move the basement walls for more storage, would that be a deal breaker for warranty coverage???
Click to expand...

What happens if the cause of failure is unclear, but the modification is suspected to have caused the problem?

In theory, the burden is on the manufacturer to demonstrate that your modification caused the problem. In practice, you could end up both right and unhappy as your RV sits waiting for repair authorization and the entire camping season passes you by while you argue.

Don't be afraid of modifications. Just don't get over your head.

Dan as always the perfect answer !!!

Sent from my XT1585 using Tapatalk

After getting the measurements between the closet wall and the front cap I decided that one bat of R19 would be the way to go. I used a spray adhesive to help stack the insulation for the first layer against the cap. The second layer is standing straight up and down. I was not able to double up behind the cubby as there is not enough room. Due to limited space it took a couple of hours to get it done. Well worth it though as we no longer get the heat wave when opening the closet doors and the bedroom temp is more in line with the rest of the rig. 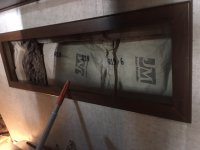 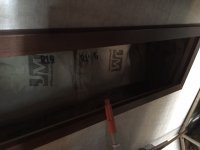 Ikea to the rescue! We have been trying to decide on a desk for our rig so we can both work while out and about. Ikea has this desk/table and we decided to make it work. We bought 2 of them and I combined them. I had to do a few mods to make them both work together, but the end result will not only work but does not look half bad either. I also used a round saw on each side for our power cords. I have one more mod to do and that is to take one of the left over flip up ends and attach it in front of the drawers on hinges so that we can have a bit of a dinner table as well. 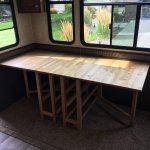 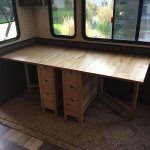 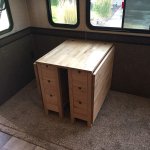 We bought what Ikea calls a gate leg table. To combine the two I ended up with two of the table wings left over. I fitted one to make the middle of the table bigger, and increase the overall length as well. The second I cut down and hinged in the front so we can still have somewhat of a dinner table without putting our computers etc away to eat. I also cut down one of the smaller top pieces to create a shelf towards the floor for our battery back up/surge protector to sit on, and to allow the leg of the table to slide under when closed all the way. All finished: 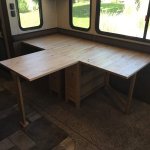 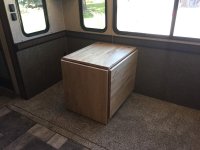 M
Any upgrades on your Heartland Cyclone 4005?