I'll start out with a little information then get in to the question.
I have had slideout toppers on my other Landmark, we like them, they are going on to the new rig.
I measured the slides, there are 5 on this rig, no issue with how to measure, the slide are on the way. VERY comfortable with installing them.

Then my problem comes in.

1 slide out of 5 on the new rig. The dinet slide.
It has an awning already on it and the awning mount hardware is mounted pretty much exactly where the slideout topper hardware needs to go.

Can the awning just be moved down a few inches to fully clear the slideout topper hardware, etc and just mount the awning a little bit lower than stock location?
Again I am comfortable doing all of the things required. I am just curious if I am thinking it is typically that simple, for the most part, or if there is more to it.

I have seen new rigs with slide toppers, but up until this exact one I did not noticed the placement of the awning on a slide where there is a topper versus when there isn't a topper.

This is a new Landmark Lafayette. Again, just the dinet slide already has an awning installed, do I move it down to completely clear the topper hardware and move on ?

Thanks in advance for any info!

We plan to get back to seeing many of you and some rally's soon. We're tired of the lack of Heartland family life.

You might want to take a look at this questions and answer on etrailer. it might help.

I believe I figured it out. Fingers Crossed.
Install will be starting this week.
5 slides. I might be able to get 2 a day done.
I'm not as quick as I used to be, which wasn't super fast then.

Be sure to take some pictures and post them. How you handle the slide that is close the the awning arm would be especially helpful.

So the topper going on the slideout that already has the awning installed ended up being the last one I was going to tackle.
Couple reasons.
1. I wanted to get the other 4 under my belt because they were more normal scenario install.
2. When I opened the tube that the slide toppers come shipped in. The connecting rods were missing.
So 5 slideout toppers all ordered at the same time, 2 of them, exact ahrdware needed. 2 of them extra hardware needed. 1 of them missing needed hardware.

At the moment waiting on the 2 connecting rods to come in that connect the slideout topper to the mounting brackets.

And, on one of the very first couple pages, the instructions included answered my question.

You can mount the topper on the T moulding. You just needed to essentially put the mounting brackets upside from normal install, and if they go all the way through the moulding, which they will, you have some sort of backing for the screws. So the normal self-tap included screws will get replaced with nuts and bolts washers. And nuts and bolts "just" long enough to go through the moulding so they don't press in to any seals or the RV when the slide is closed.
It jsut means on those mounting brackets I will need some extra measuring.
I kid but serious in the same note.

Here are a few pictures of during or after the toppers are on.

At the moment, 4 of the 5 are installed. I should have the final equipment by Tuesday and installed by end of day and be done done with most of the big stuff.
Well I have a MorRyde cargo slide tray coming but that will be another post somewhere else

It was not nearly as involved as I was thinking.
1st awning took right around an hour and 30 minutes.
2nd took 2 hours because I thought I was going to be faster after installing the first. That was a lie. So I called it after those 2.
3rd and 4th were right at 1 hour each from opening package to operating the slideout in and out to test. So I'd be what you call an 'expert' by now.
But the 5th one will take a bit longer jsut from a different mounting setup. I will get some decent pictures from that just to have and in case any wants more detail pictures.
I already have more but I don't want to overload the Heartland servers with JD's random modifications pictures with 30 pics per thing.

So yeah. More to come with the conclusion this week. Very anti-climatic. 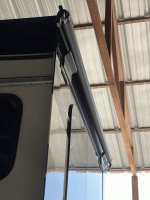 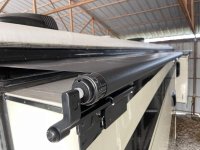 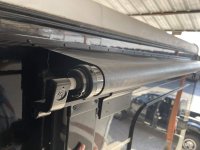 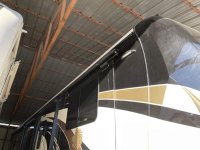 And then one picture decided to go all sideways for no reason and I cant correct it on the forum. Oh well, then more pictures to come.
Last edited by a moderator: Nov 30, 2020

Staff member
Looks like you did a really nice install.

Thanks gentlemen , shipping update has been pushed a couple days so the toppers won't be finished until Thursday at the soonest.

Thank You Jim for taking care of that. It seemed like the system automatically rotated a vertical picture to horizontal. Maybe I missed something somewhere.
G

You don't say which slide topper you purchased. If it's a Lippert Solara, than you should be okay. If your flange to flange measurement is 152 3/4", that would make your box size about 6" shorter or about 146 3/4". The 13' slide topper would have a fabric width of 151". Meaning your fabric would be short 1/2" on each side of what is considered full coverage, but it will still be covered. Just take careful measurements before installing to be sure you are okay with the result.

I installed three slide toppers on my Sundance last week. Referring to the OP. I also had to deal with an factory installed awning on the door side slide. So I had a clearance issue. For that one, I ordered the slide topper 6" shorter than normal knowing I wouldn't get complete coverage on one side of that one because of the clearance issue. I measured everything more than twice to be certain of the size as once ordered, the slide toppers are not returnable. The aforementioned door side topper has a clearance of 1/2' from the factory awning arm which is enough for proper operation without interference. 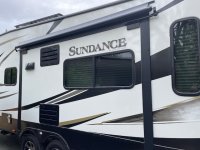 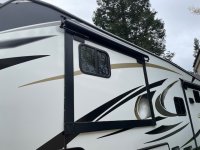 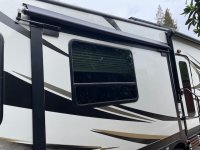 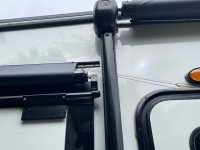 Has anyone repaired or replaced a slideout ram cylinder?

How to fix slide topper sag?