2015 Landmark Newport - Cargo Bay Project - Part 2 Part one was the front wall of the cargo bay. I thought that part one was a tough and time consuming project that required a lot of sitting back and thinking about how to best lay out the new walls. Little did I know it would be nothing compared to Part 2. If you read Part 1 the project idea was born when I had to remove the front cargo bay wall section to access a black tank sprayer line. When the wall was removed I found there was some additional floor space that could be captured if the wall was modified. I also didn't like the fact the wall was screwed into the floor and figured there has to be a better way to skin that cat than keep making new holes each time the wall was removed. If the design is done properly there is no need to screw any of the barriers to the ceiling or floor. The “C” channel and aluminum top stops were again used to keep the barrier securely in place.

This is the before picture. 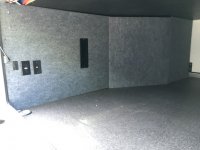 After removing the existing walls, there were a number of items that required relocation to one degree or another. After all of them were addressed the NEW wall location could be determined. The first was the 120 receptacle. Its location caused the cord that was plugged in to stick way out and require relocation. Before and after pictures below. Note: The inverter was mounted so the cooling fins were touching the surge suppressor and impacting air movement over the fins. The inverter was moved about 2” to the left to allow good air flow. 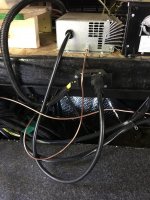 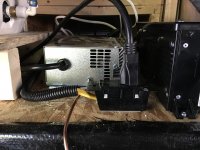 The next step was to find a new location for the TV jack, 120 receptacle, and cargo bay light switch. I removed a panel on the inside of the outside wall that had been exposed after removing the existing wall. A new piece of 1/8” board was cut to fit the area for mounting the devices. Note: The opening where the existing receptacle power was routed is large enough for the additional wiring to be added. This wiring will be behind the new wall location. The existing wall and new piece were covered with the new material and items mounted. 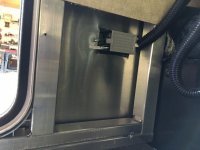 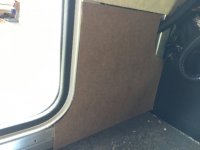 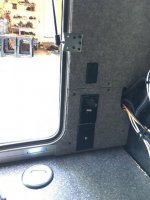 By the water heater, there was a large bundle of wires that were sticking way out. The Ty-Raps were removed and the bundle flattened out. The wires were then secured again. 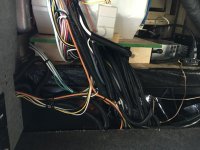 The next area that required some work was over by the pump and plumbing. You may note that I had done a previous project to mount the pump on high density foam and install a water expansion tank. If you do any dry camping this is something you definitely want to do. The foam quiets the pump noise down dramatically, and the expansion tank stops continuous “Rrrr, Rrrrr, Rrrr” of the pump. Make sure to use flexible lines on the pump in and out, and get rid of the PEX connections. Getting back on the project track, the pump needed to be relocated up to the upper level next to the expansion tank. The water filter on the ceiling had to be moved about 6” closer to the Utility cabinet. Also, I cut some new pieces of PEX pipe, crimped new connections, and Ty-Raped the pipes to clean up the factory’s plumbing explosion. See the before and after below. 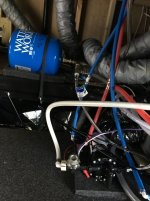 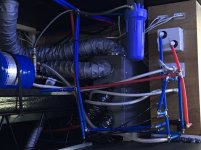 Next was to lay out the wall locations and install the aluminum “C” channel on the floor and other supports. 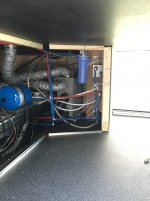 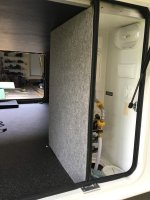 The other two pieces were cut and covered, and the ventilation louver installed. PROJECT COMPLETE! 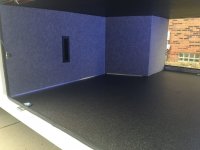 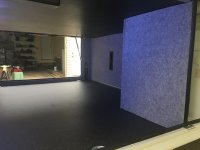 Front side from Part 1 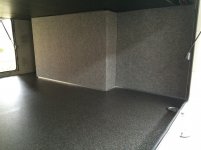 At the end of the day, I took some measurements. The original cargo area was approximately 96 cubic feet in size. The new cargo area is 123.5 cubic feet. Simple math seems to indicate that I increased by cargo area by 27.5 cubic feet. That is a 28.6% increase in storage area. I personally feel it was worth the work. It not only increased my storage area but I got to really get familiar with what’s in the belly of the beast.

AWESOME !!!, Blake !! .. Now you have me seriously thinking about doing something similar !!

Blake Awesome job. I like the way you do things. look better the factory. LOL
How is your pressure tank working for you. Is the factory variable pump operating like normal, and cycling less often ? Or is it fighting with the pressures of the tank ? I have considered this mod before I finally fixed my pump back feed problem and now have my system dialed in and working perfectly. I think I would still like to have it for flushing the toilet at night. Although with my pump silencing Mod I did a while back you can hardly hear it now.

Anyway You did a real nice Job on that basement and I have a feeling were going to see a lot more from you in the future. Keep up the good work and share it with the rest of use.
Maybe you should start your own Mod thread.
Do you have any picks of whats behind that front wall ? I have a buddy with a new Arlington and it looks like there's a lot of wasted space up there.
J

Blake - love P2 of your storage bay mod. Great work and thanks for detailing it here.

I removed both sections of the same wall in my Ashland in order to facilitate the install of my whole-coach R.O. system and haven't put the walls back yet! In fact, I had the movers pack them up last week. I too LOVE all the additional "found" storage space. In the Ashland, on that upper deck, there's a lot of space that can be used.

I do plan to get the walls put back on as I feel that I get a fair amount of heat from there, into the coach when I'm trying to cool the place down. Plus, if I leave a storage door open, flies and bugs can get into the house much more easily.

A question for you Blake !! On my '16 Newport, I tried removing the front basement wall .. Just to learn what's behind it, and investigate potential additional space, as you did .. However, seems the wall is ONE solid piece of OSB, held in place partly by being installed behind the strut supports .. How did you remove the wall?? I'm assuming you had to cut the OSB somewhere .. Thx

Nice job. I have been looking at my rear wall and thinking it could be done much better. I would like to be able to remove the center angle panel easily with magnet latches at the top(maybe 2-4 of them) and a handle to pull it loose. While doing this I can run a sat coax from the Directv SWM splitter that I put on the back side of the ODC over to the over side of the bay for our belly TV which I brought along from our SOB trailer.

I have ammo cans that I carry my RC Lipo batteries in going back and forth to Arizona and it would be nice to have an area on the upper deck behind the wall to strap those down during travel. That would put their weight closer to the axles. A snap off magnetic door would make it easier to get them in and out.

Just to clarify, when you referred to the inverter, that is actually the converter.

When the house closes in a couple weeks I will have lots on time on my hands to work on such projects. Maybe one of my RC planes could travel behind the wall also.

Thanks for the cudos. Picks of what's behind the front wall are in part one. The expansion tank addition is great. You get at least four flushes or run the water for 15 seconds before the pump runs. If you leave the water on the pump stays on and doesn't cycle. Turn the water off and the pump runs about 20 seconds and shuts off. It nice on the road for quick potty stops on the road. $40 for the tank and $20 in misc. plumbing parts. Worth every penny.
Thanks again.

Thanks Jim. I've benefitted from so many posts here it's my pleasure to be able to give a little back.

I did not have to cut the wall. I could not get it out until I removed the mount for the hatch gas shock and the two screws holding the Level Up panel. Other than that it was a few other screws and a lot of wiggling. Hope that helps.

You are correct, converter. My wife, the teacher, word smithed my post but not having any electrical background did not catch that.

I have not pitched the idea of taking any planes with me. I do mainly glow and have a perfect spot picked out for the starter box. Waiting for the right moment to drop that one on her. :angel:

Hey Blake. A first-class job, where did you buy extra wall carpet from for the project?
Den.

I used about 1/3 of the roll on this project. You may be able to find a smaller amount and save some $$$$.
You must log in or register to reply here.